Genetic Fingerprinting or sometimes called DNA profiling is a method to define individual DNA characteristics for one person. The process was invented in the early 1980s by Alec Jeffreys, Peter Gill and Dave Werrett who were working for the Forensic Science Service in the UK. The first patent however for this method was stated in 1983 by Glassberg. The invention of it led to a major change in the capacity to identify a person by analysing their body fluids. Until then identification was pretty much based on real physical fingerprints and blood-groups (which are not individual). The genetic fingerprint or DNA profile however is unique as every human being is unique in its DNA composition. Even identical twins can have single mutations which can be detected if you sequence their whole DNA. But what exactly is a genetic fingerprint and what do you need to analyse?

Nowadays in forensic context the genetic fingerprint refers to the analysis of up to 16 so called Short Tandem repeats (STRs). A short tandem repeat is a repetition of a certain pattern of the nucleotide bases in your DNA. We have four of them and they are called Cytosine, Thymidine, Adenine and Guanine (C, T, A and G). Now imagine you have the sequence GATAC in the STR called “Snot” and repeat it for 5 times: GATACGATACGATACGATACGATAC, here you have your short tandem repeat Snot with the so-called allele (variant with 5 repeats) 5.

The important thing for the genetic fingerprint is that these repeat sequences don’t code anything, they are like nonsense noncoding parts of your DNA, so you cannot correlate any visible trait to these sequences.

How the genetic fingerprint is displayed

So back to the genetic fingerprint. If you analyse one STR you will always have it twice because every chromosome in your DNA is paired up. Let’s say the STR “Snot” is on Chromosome 5, and you got one chromosome 5 from your mother and one chromosome 5 from your father. The STR “Snot” can be identical on both chromosomes, for example your mother got 5 repeats and your father too. Then you are “homozygous” for the variant/allele 5 in “Snot”. But if your mother has a 5 and your father has a 6 then you have 5/6, you are heterozygous. The genetic fingerprint is composed of more than one STR to make sure the analysed pattern is unique for that individual. This is necessary because STRs only have a range of alleles they can have. Let’s say the STR “Snot” only ranges from 3 to 5, so you can only have a 3 a 4 or a 5, the possible combinations of alleles is not infinite and therefore it is possible that two random individuals have the same alleles. So, for the modern genetic fingerprint only variable STRs were chosen that have a wide range and you must analyse 12-16 STRs. If you use the 16 STRs of one of the commercially available kits the probability to find exactly your unique fingerprint is roundabout 1 in 1 trillion people. As there are only 7.9 billion people on this planet it is pretty obvious (if there are no very unlikely coincidences) that it can only be your genetic fingerprint.

Picture 1: A display of the genetic fingerprint as a so called electropherogram, for every STR there can be two alleles. Look at D3S1358 (second marker in the blue lane) there is only one 15, so this individual inherited a 15 from mum and a 15 from dad. In the STR SE33 (third marker in the red lane) it’s 15 and 17, so the individual inherited differing alleles from mum and dad.

Nowadays 12-16 STRs are used. In Europe and the UK everybody is using the same STRs so it’s easy to compare the genetic fingerprints between two different countries.

If you need more information on what a genetic fingerprint is this video can help:

What is amplification or PCR?

Amplification means that you copy a certain part of the DNA by using a technique that is called PolymeraseChainReaction (PCR). We must do that because DNA is invisible and the amount of DNA in a sample is so tiny that we cannot physically look at it. DNA amplification is making more of the allele you want to count and to make it visible by adding something to it that makes it visible.

The easiest way to explain it is to imagine the DNA as a huge book. Instead of reading the whole book we only want to count the letters on a particular row on a particular page. As we know the first and the last word of the row we are looking for (because this is identical in every book/genome) we look for these words and then start copying from start to end repeatedly. You copy it so often that you can finally see it. This we do for every row (STR) we want to count. When it’s finally visible we count the letters of the row and have our final STR allele numbers. And when you done that for all the rows of interest, meaning the STRs you need for the genetic fingerprint, you can look at your numbers and have your individual profile.

If you want to know more about PCR here is a fantastic video on how PCR works:

And what is sequencing?

Instead of just counting the numbers of repeats in your STR, in sequencing you read every letter of the word one by one. You can count the allele, but you also get information on the structure of this word. This allows you to find tiny mutations which can be helpful if you cannot access the whole genetic fingerprint and you are investigating very closely related people.

A fantastic explanation of sequencing can be found here:

What can you do with the genetic fingerprint? – Identification & Paternity

The genetic fingerprint can be used to identify people. For example, if there is a dead body found you can identify this person by analysing DNA of the body and compare it with the DNA of belongings from a missing person. Or if you are at a murder crime scene and you find a knife you can analyse the stains on the handle and the blade and then compare it with the DNA of the victim and the suspect. If there is no suspect you might be able to search the UK national database which contains profiles of individuals and crime scene samples. 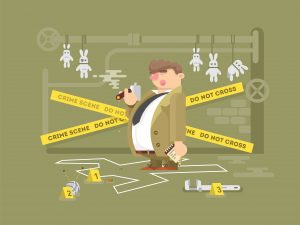